Mawaru Penguindrum episode 1 – The Bell of Fate Tolls is the most engrossing opening episode I have ever seen in anime. It excels in virtually every factor criteria for what makes for a good first episode: The premise, direction, art, music, pacing, depth, detail, effectiveness as introduction episode, and its ability to draw the audience into the story.

There are already blogs about symbolism and aesthetics in this episode, so I won’t get TOO far into them. Follow those links if you’re interested as they’re really good reads.

As I mentioned in an earlier post, the title of this anime suggests cycles of events. I suspect the entire story will be some kind of a cycle in a grand scale, but the repetition of the past can already be seen in this very episode.

The episode opens and ends with the identical line: “I hate the word ‘fate’.”
Why does he hate that word? That’s what the entire episode was about, and possibly what this entire series is about.

Here’s another mirror sequence within the episode. The first sequence occurred immediately after the OP, and the second one nearly at the middle of this episode. Did they just make a full cycle of events? Also notice how Himari and Kanba are wearing the same clothes, while Shouma’s changed. Are they stuck in time? Well, Himari is technically a walking corpse, and Kanba did get his soul (?) taken out during Survival Strategy time.

I absolutely love the way the second sequence was presented. This happened after the dramatic scene where Himari’s life was extended by the hat, and effectively slows the pacing of the show to builds up for another climax. Not only that, it shows how their lives have returned to normalcy, oblivious to what they’ve just gotten themselves into.

The background and storyboard for this sequence is almost identical to the first. However, there are subtle differences in conversations and character expressions that gives this scene a lot brighter atmosphere compared to the first, which is ironic because we as viewers clearly see their situation has taken a turn for the worse.

They say a picture is worth a thousand words… Then a video must be worth a million. Truly talented directors never use narration to introduce characters. In this episode, narration was used only to express Kanba’s philosophical belief and to establish a central theme. Introduction of character personality and their backgrounds are seen in much subtler ways like this scene.

Immediately after Himari wakes up, it was Shouma who embraced her first (1st screenshot). There are many hints implying Himari is closer to Shouma than Kanba in this episode. Shouma was the one who cooks for her. Shouma was the one with her when she “died”. the photos in their home always show her playing with Shouma rather than Kanba. And from this scene, Shouma is the one who openly expresses his emotion.

Then, there’s the pause by Kanba in the 2nd screenshot. This shows that even now, he’s more distant to her than Shouma, and his opposite personality.

He joins Shouma in embracing Himari in the 3rd screenshot. Kanba does love Himari just as much, and even his cool personality can’t hold him back from the group hug. The fact that he interrupted Shouma and Himari’s private moment may also mean something…

In the 4th screenshot, we seen him pulling away, with Shouma still embracing her. Last in, first out. This one single action just amplified all three observations I just made. I tried to keep this short, but all this and more had been conveyed in a 10-second clip. Incredible.

Other subtle hints for their personalities.

It’s customary for Japanese houses to have the names of its residents listed by the gate or mailbox. Notice how two names are covered by a piece of tape. Presumably the names of their parents. The significance of this shot is that the parents’ names are covered only as a temporary measure rather than completely replacing the sign. As such, there are numerous signs of their unwillingness to move on from the past inside the house.

Kan/Shouma/Himari's height. Doesn't get any more obvious than this.

Or this. Notice Double-H is in this cut as well.

These are their awards from elementary school. Shouma: Grade 4 for calligraphy. Kanba: Grade 2 for painting.

They’ve done an irrevocable sin of some sort in the past. As of ep5, we still don’t know what it was, but could it have something to do with their parents?

The speculator in me is guessing maybe Himari had something to do with their parents leaving/dying etc.

When Shouma and Himari saw a happy family, Shouma gave her a glance, then quickly steered into another topic. The same was seen again in a particular scene in ep3 “curry episode”. Then again, maybe Shouma is just being overprotective.

Seriously, did this sequence remind you of Doraemon? The blue arm, this zoom into the object, the convenience of this companion… too much to be a coincidence for me.

When was the last time you saw such an advanced camera angle in anime? The balance of composition in this shot is phenomenal.

Such a powerful scene that depicts the urgency of the situation. An event that had been foretold, but one that you would never imagine could actually happen if you were in their shoes.

The perceived distance using exaggerated perspective point, the light… Shows their futility in the face of fate.

Shouma at left in seated position, but appears to be more poised to act than Kanba who’s standing up. Depicting the one who hasn’t accepted fate yet, and one who has given up.

The light, oh wow, the light. The way Kanba’s body casting the shadow shows the severity of his despair, also emphasizing the intensity of light (fate) shining down on him. Another example of beautiful asymmetrical balance in both composition and color. I can probably write an entire blog post on the godliness of this one scene.

This sequence in particular was exceedingly impressive, perfect use of the background music to emphasize the dissipation of tension.

This is not the only show with many advanced presentation techniques, or attention to detail, but it’s the effectiveness of their application that makes the direction in ‘Mawaru Penguindrum’ exceptional.

Maneki-neko are common Japanese figurines believed to bring fortune and wealth to its owner. Its raised paw is the hand gesture of beckoning, usually to draw customers or money into the residence. After watching ep5, I’m starting to think maybe this is maneki-neko is placed there, inside of an outlandish container, in the hopes of guiding their parents back to the “house of memories”. However, the container representing an obstruction of it taking effect… as in some force is preventing his parents from returning.

I find the existence of this figurine to be very significant. Kanba seems to reject fate and higher entities like God, but deep inside, he still wants to believe their fate can be changed, and clings onto even the slightest hope available.

Based on Zojirushi brand pot. I think this is just for the lulz.

This show is based on near-future. I think that’s why Himari’s age in the hospital scene’s patient form was blurred, so we don’t know exactly what year it is. How the hell did I get all that from This screenshot? First of all, these thin display panels (that can be hanged like that) don’t exist in Japanese subway trains yet. As advanced as Japan is in tech, it’s still paper ads being hanged in trains. Of course, there are LCD (LED?) display panels on the walls though.

“Today’s Slogan” is often used as hints for the episode. “Garbage goes in the garbage bin” in this episode must be referring to the penguins’ first appearance. Does that mean they’re garbage? (or defilers, dark existence etc?)

Sunshanie International Aquarium (it was “Sunshaney” earlier… Even this show is not free from sloppy Engrish) is based on Sunshine Aquarium in Ikebukuro. There are many other real-life locations in this series. Check out http://d.hatena.ne.jp/riyot/20110710/1310309043 for more details.

The package came from “Pingroup”… It just so happens to be same as the name 「ピングループ」, this anime’s production team’s name as seen at the end of ED. Also notice “ping” spelled out in English, refuting its own “Penguindrum” romanization for 「ピングドラム」 in the title screen.

The stick men in the background. Ikuhara-style cost saving at its best. Not only is it easy to draw and can be digitally copy/pasted, there’s a certain feeling of surreality in addition to making the main characters stand out.

Apparently, normal people can’t see things penguins are holding either. But what happens when it lets it go and Shouma’s suddenly holding it? Well, I guess it’ll never happen since it’s anime. 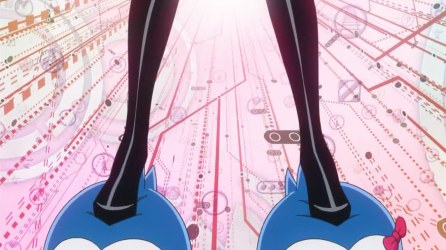 And here’s the cliffhanger ending for the episode. Seriously, everything that makes for a masterpiece of an intro episode.

“The Bell of Fate Tolls” here also implies the beginning (or opening bell) in Japanese. This means it’s the beginning of the fate, and at the time of this writing, ‘Mawaru Penguindrum’ appears to be fated to become a masterpiece.